Been wanting to catch Ah Boys to Men 2 ever since it's been released in cinema's but never gotten the chance to until the first day of the lunar new year! I finally got to catch it with D my parents, and some of D's friends who were sited a row away from us (what a coincidence right?) after visitation at D's grandma's place.

I've always wondered what's life like in Tekong for the army boys. How tough can training be? Why guys hated entering the army and tries all sorts of things just to get exempted. Well, it isn't complusory for girls to enter the army in Singapore, whereas the guys do not have an option to choose. Every boy of aged would be called to serve the nation for 2 years, whether they like it or not. 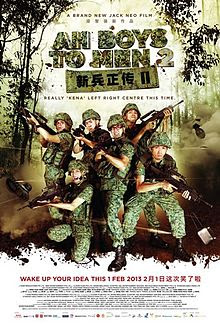 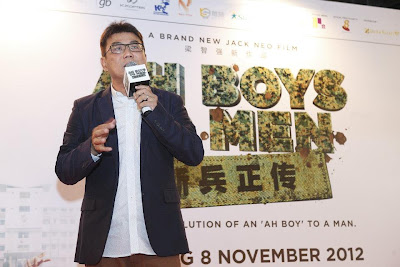 Continuing what was left off from part 1, Ah Boys to Men is back with part 2.

Ah Boys to Men is a 2012–2013 Singaporean two-part comedy film produced and directed by Jack Neo, written by Neo and Link Sng and starring Wang Wei Liang, Noah Yap, Joshua Tan and Maxi Lim. It revolves around a group of army recruits inNational Service in Singapore.  The film consists of two cinematic parts, the first commercially released on November 8, 2012, and the second on February 1, 2013. In conjunction with the Ministry of Defence's 2012 NS45 campaign, From Fathers to Sons,[4] it is meant to commemorate the 45th anniversary of Singapore's National Service.  Ah Boys to Men is the first local film to be released in two parts and the first to film in Pulau Tekong.

Spoiler ALERT:
Ken is quick to adopt a change in personality by becoming an "on-the-ball" recruit, even more so than "Wayang King" Aloysius. Differing viewpoints sour the friendship between Ken and Lobang. Meanwhile, Ken's father has become partially paralyzed because of his stroke but is determined to make a recovery. After coming in first for his 2.4 kilometer run, Aloysius shares that his secret is "no cigarette" and is quick to urge smokers to give up smoking, causing Sergeant Ong and Commanding Officer Tham (Fish Chaar) to propose a cigarette cut. Angry at Aloysius, Lobang and a few other recruits pull a prank on Aloysius by placing a heavy stone in his backpack. After realising what Lobang had done, Aloysius angrily confronts him; this strains the relationship between the duo. Feeling excluded from the group, Aloysius seeks advice from his parents. His father (Chen Tianwen) tells him the best solution is not to do anything and tells a story of a fictitious war between two nations to demonstrate why. Back at Tekong, Recruit IP Man learns about "Real Bullet" Zhen Zidan (Benjamin Mok), an "Ah Beng" who stole his girlfriend Mayoki (Sherraine Low). IP Man first retaliates by pretending to have a better girlfriend and criticises Mayoki for having inferior qualities of a woman. "Real Bullet" hits back by releasing a video of him and Mayoki engaging in an initimate act. IP Man is crestfallen and asks his bunk mates for help. Lobang plots a scheme to attack "Real Bullet" and Mayoki at a car-park by throwing heaps of human excretion mixed with chilli and wasabi at them while they are in the car. They succeed but "Real Bullet"'s gang chases after them after he calls for back-up. The recruits manage to shake the gang off; they celebrate at a restaurant at White Sands later that evening. However, at the restaurant, they are ambushed by more of "Real Bullet"'s gang members, who have managed to track them down. Aloysius, like many others, is quick to run away. Ken, however, seeing Lobang and the others getting beaten, runs back to help, per the principle "leave no man behind". Because Ken saved his life, Lobang vows to stop smoking in return. Later on, after an investigation by the sergeants, Ken and the perpetrators of the earlier scheme carried out that day are punished. Concerned, Ken's parents speak to CO Tham after learning of what had happened. Ken's father has shown visible signs of improvement and is starting to be able to talk. He thanks the CO for training Ken to become a "real soldier", but is against him being punished for fighting. The CO agrees to make an exception and exclude Ken from punishment. Ken, though, after learning that the others still would be punished, is granted permission to continue his punishment. Now unhappy with Aloysius for abandoning his team mates, Lobang attempts to sabotage him by throwing his magazine but after a comical turn of events, it is Lobang who loses his magazine. However, Aloysius quickly gives his magazine to Lobang during an equipment check and takes the blame. While searching for the missing magazine, the relationship between the two grow better. For one of their final assignments in the Army, Ken's platoon have to rescue a hostage in a hut in the jungle. The platoon's eccentric assessor (mrbrown) is chased by a large herd of wild hogs halfway into the assignment; the soldiers are quick to come to his rescue.

Following their "graduation" from the Army, the recruits reunite with their kins. Ken's father is present and comes to greet Ken; he is finally able to walk steadily without any aid. As the film ends, various recruits' postings are shown — only Lobang made it to Officer Cadet School (OCS). 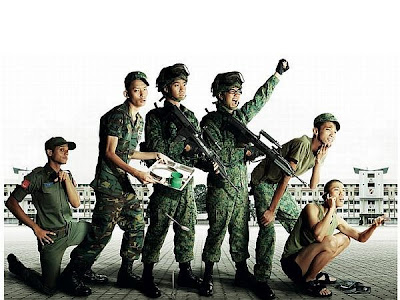 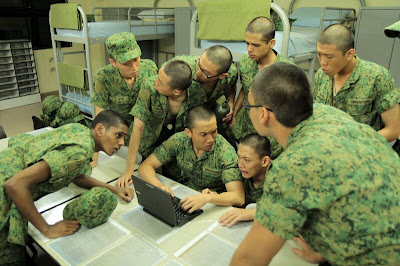 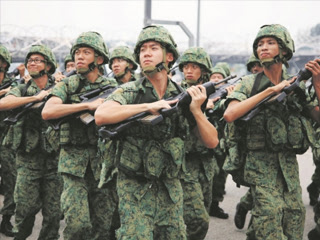 I preferred the second part of Ah Boys To Men actually. I liked how the tension was between the boys were and how they eventually became a bunch of good friends after going through "hell" together! I guess that's what makes most guys miss army after passing out, right?

Loved the plot and script for this movie. And yes, why part 2? It's not that the first part of it isn't good. It's awesome and I really enjoyed watching it but I felt that part 2 has more juice to the story. Part 2 actually shows what the army is really about. Not just the surface, but the depth of being in the army and in turn learning something and gaining awesome experience in life that money can't buy in the process.

Of course, not forgetting the amazing actors in this movie! Great acting skills, natural but of course there will always room for more improvement for an better results! On a personal note, it's great seeing friends having their breakthroughs and realizing their dreams! Way to go guys and all the best in future success! (if you ever see this! haha) (:

If you have not watched it, you really SHOULD! This movie is the bomb! It's hilarious, it makes you laugh like an idiot yet there are parts where it's touching enough to make you tear. If you're looking for a movie to catch this Lunar New Year, watch AH BOYS TO MEN 2!!

(some of you must be wondering what HUAT means. It means "WIN" in hokkien. Lunar New Year is a time where everyone would gamble with their friends and family in almost every household in singapore! The two most common games played every single year is "Black Jack" and "Mahjong".)