A deal-of-the-day website that features discounted gift certificates usable at local or national companies. Groupon was launched in November 2008, and the first market for Groupon was Chicago, followed soon thereafter by Boston, New York City, and Toronto. By October 2010 Groupon served more than 150 markets [clarification needed] in North America and 100 markets in Europe, Asia and South America and had 35 million registered users.

Well, I happened to take part in Groupon's Tweet Contest #GrouponShoppingSpree, thanks to Zerika who knew about it first and had me mentioned on twitter, so i gave it a shot myself too and won $100 credit! I should thank her, shouldn't I? Haha!

All you got to do is follow some simple steps which would definitely be stated. Once you are done, the nest thing to do is to wait for them to announce the winners! If you're selected, worry not because they would definitely find ways and means to contact you and have you claim your prize!

Step 1: Keep your eyes out for contest or giveaways.

Step 2: Follow the steps mentioned and be sure to complete all of them.

Step 3: Wait for them to announce the winner!
If you won, they would usually mention you back!

Step 4: They will then inform you what you need to do to claim your prize

As simple as that!

NOT ONLY THAT!! If you were to refer your friends to Groupon Singapore and they were to purchase their first deal, you get to earn $10 Groupon Bucks! Isn't that cool?! 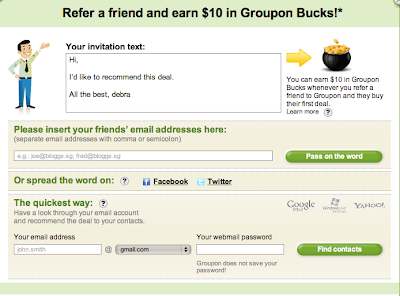 After all the joy from winning that $100 credit, I still have not purchased any deals. It's not that there aren't any tempting deals which refrains me from making that impulse moment to buy deals off Groupon, but I controlling and holding back, keeping it patiently cause I know it will come into good use pretty soon! And i'm just waiting for that right moment! Hurhur.

SO,
those of you who have Twitter accounts...
Do follow @GrouponSG for future contests and who knows?
It might just be YOU who gets to win next!

Lastly,
Thank you again, Groupon Singapore for the $100 credit!!
I'm a happy shopper!! ♥