I have never been to beer festivals before and have been wanting to go and check it out ever since I've heard about it couple of years back, yet I never had the chance too cause I was always caught up with something OR I couldn't find someone to tag along for company.

We finally found the place, after giving Corde a calling asking for directions! Cause D said it's so empty and the event might have already ended. Later on, we found out from Corde that the crowd has subsided and left cause we came too late! We reached Marina @Keppel Bay around 10pm and the event ends at 11pm. How ironic huh? 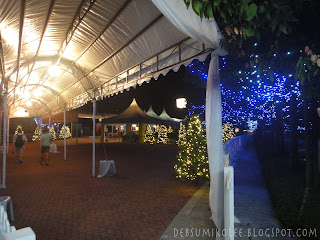 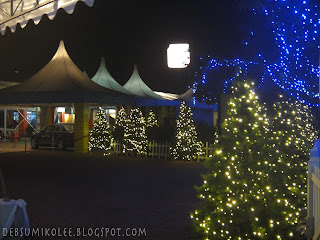 beautiful lighting isn't it?
looks like there's thousands, zillions and millions of tiny fireflies on them

Thanks to my dearest junior, Cordelia Low (I'm sure many of you would've heard/know her, she participated in F1 Singtel Grid Girls, FHM and many more!) for telling me about the event and this time round, I manage to attend at least ONE beer festival in my life! haha Cordelia's a junior from Primary school and we so happened to be in the same seconday school as well and CCA along with my best buddy, Rica. Besides having the buddy back from Aussie, Adelaide even D came along with us for the beer festival! Zerika and Mr Style King were suppose to come as well, but they were caught up with some unforseen circumstances. And so, the 3 of us managed to spend sometime together (this doesn't include D since he's meeting Corde for the very first time! haha), talking about old times and what we've all been doing! (This is just a summary!) 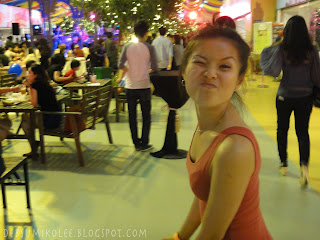 that's my buddy/twin/sister who just got back from Aussie, Adelaide!
Well, I'm definitely darn glad she's back! I've not seen her for ages!!
since we're both so far apart )':

What's so special about the Struttgart Beer Festival? Well, nothing special. It's like every other ordinary carnival kind of atmosphere. But D and I really liked the place! It was a waste we weren't able to try the food out since we had dinner before we came and Rica had buffet before meeting us!

AND, thanks again to Corde we had free german beer and hotdogs! I was still sick and coughing really bad so I gave up beer for hotdog while D and Rica tried a cup of beer which they both really enjoyed! And that REALLY was our first stop once Corde gave us a little tour, told us where she'll be and left us to ourselves to wander around. It's a BEER FESTIVAL, what's a beer festival without beers right? Sadly, I was an exception since I was sick and on medication. Boo hoo~ ): 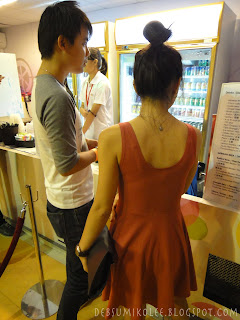 D and Rica getting their FOC german beer 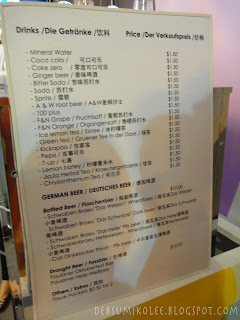 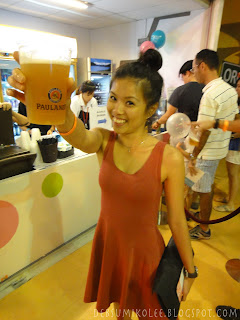 We definitely had to tour the place, check out what there is to offer. Food, drinks, german snacks and other whatnots that's at the Struttgart Beer Festival! Besides having food, drinks and other cute little booths around, the diners can also get to enjoy awesome music from a LIVE band! How awesome could your night be? It'll definitely be an awesome chill out place. D, Rica and I totally loved the place! (OK, may be more of the music and ambience instead. haha!) 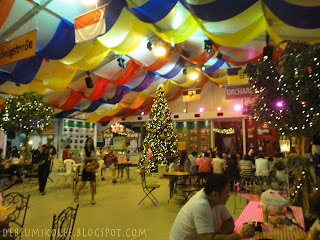 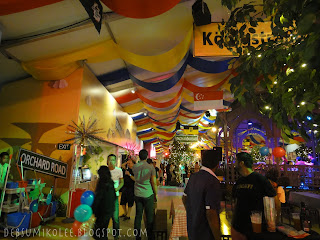 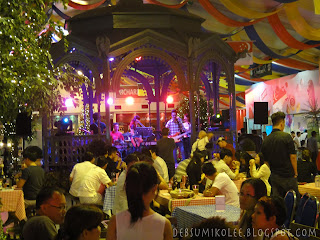 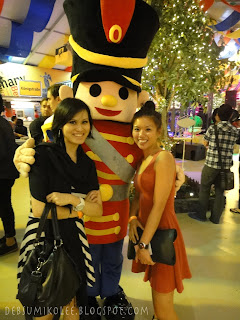 Then we found a dancing hotdog, which was right in front of us! 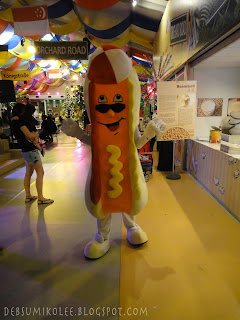 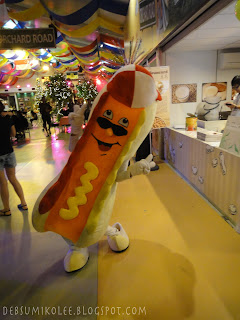 how adorably cute! posing just so i could snap a nice proper photo of mr hotdog! 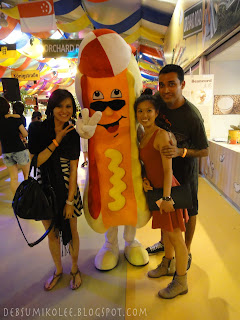 and i have NO idea who that guys is, right behind Rica -.-
we didn't even know he was in the shot, until i came home and got the photos uploaded onto my com.
random huh? 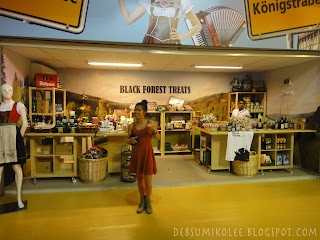 rica with the german snack shop! 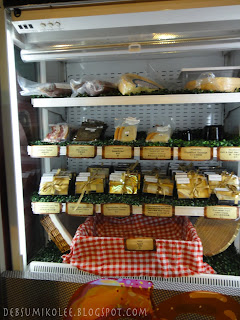 the variety of cheese 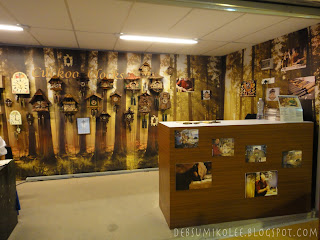 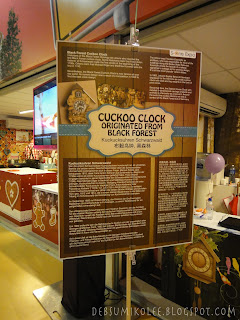 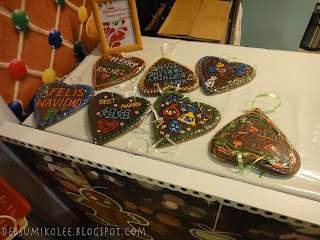 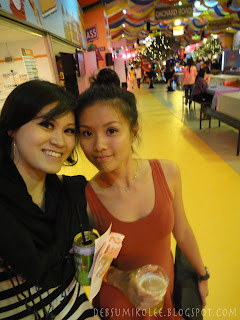 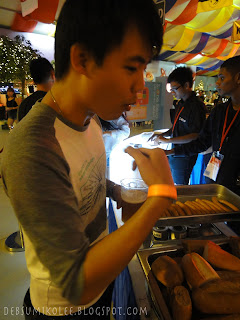 D ordering our free hotdog! it's huge!!
*i forgot to take a photo of the hotdog*
too much excitement going on! haha 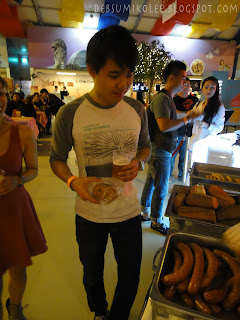 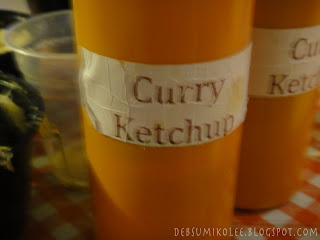 have you ever heard of curry ketchup?!!
i didn't know you can mix curry with ketchup!
how innovative indeed. hahaha!

As Corde has to take her leave for another job, we quickly took a group photo! Well, girls being girls ONE is definitely not enough. 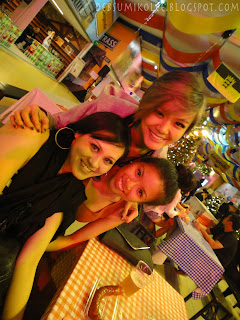 the IJ girls in action 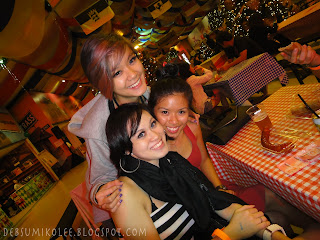 i've seen her grown and now she's a lady!
it makes me feel old, yet i'm glad this little junior of mine is still as bubbly as ever!
keep it going darling and all the best in whatever you do! (:
Rica and I will be so happy to see you grow into an even much awesome pretty women!
we know you can do it! keep the flame glowing!!
*remember to call us for your wedding ok!! if you ever see this! HAHAHAHAHAHA*

After Corde left, we stayed a little while longer to chill and enjoy the lovely songs played by the LIVE band before we decided we should head back home too. As we left, we realize we haven't finished our coupons neither did we want it to go to waste. We had at least 12 bucks to spend! Rica ended buying some german coffee beans at the german snack shop at the end. 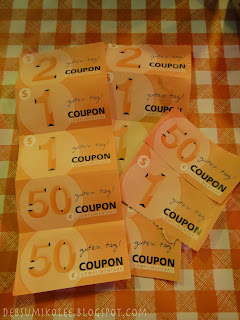 Before leaving, we happened to find a "secret" garden where there was a booth selling fruits and vegetables! Check out the photos below! If you actually realize how different and funny looking the fruits and veggies are! The 3 of us got a little excited over the shapes of these weird looking things which we ought to know yet it looks so different from what we actually know. Confusing? haha!

Try and see if you're able to guess from the photos, what vegetable/fruit they are! I would love to do a give away with your guys giving me answers! But at the moment, I've no idea what to do for give aways. So, please be patient with me! I'll do one when the time comes alright? 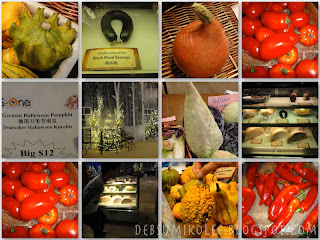 To sum it all up! Rica needed the washroom pretty urgently and so we left after D's favourite song from One Republic - It's too late to Apologise! Overall, it was an awesome night, definitely! Such moments are lovely. A night to remember! It would've been a "BANG" if Zerika and Mr Style King was able to make it. I'm sure they both would've enjoyed themselves too!

Finally, thanks to D who send us all safely back home! ♥